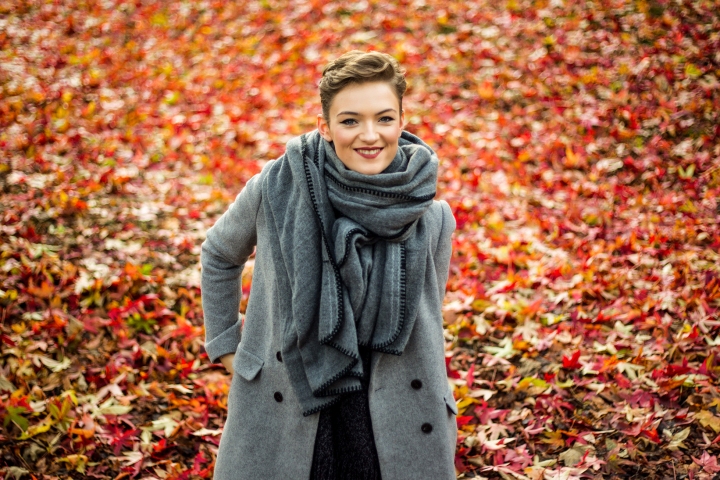 So Monday the 16th of January came and went. To most people this is another normals day but apparently over recent years it has been coined as the most depressing day of the year. With the all the fun and festivities behind us and just enough time to let some of those new years resolutions starting to slip away, it can be all to easy for mid January to turn into a bit of a downer. However, having spent one to many evenings alone in the flat nursing a one too many bowls of weetabix and nearly resorting to watching everything in my subscription box a second time round, i’ve finally unearthed myself from under the duvet to get out and get proactive and try to set an example to myself for the rest of the year. Only time will tell if this works out or not! So here is a list of my best ways of trying to bust the new year blues this January! 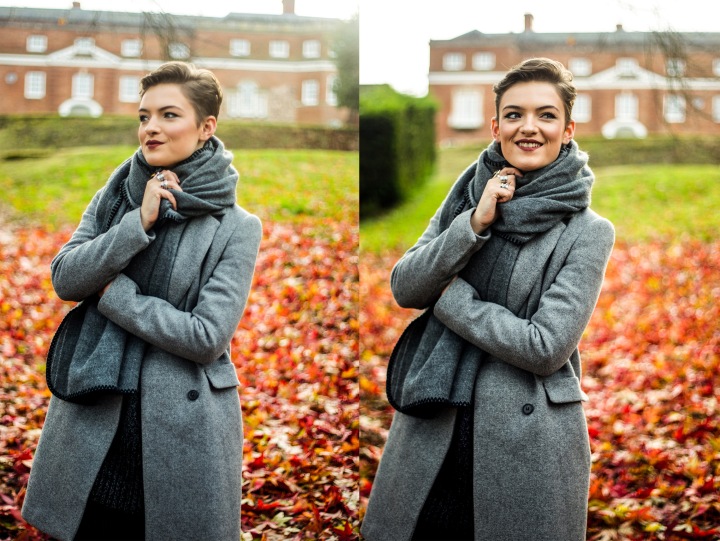 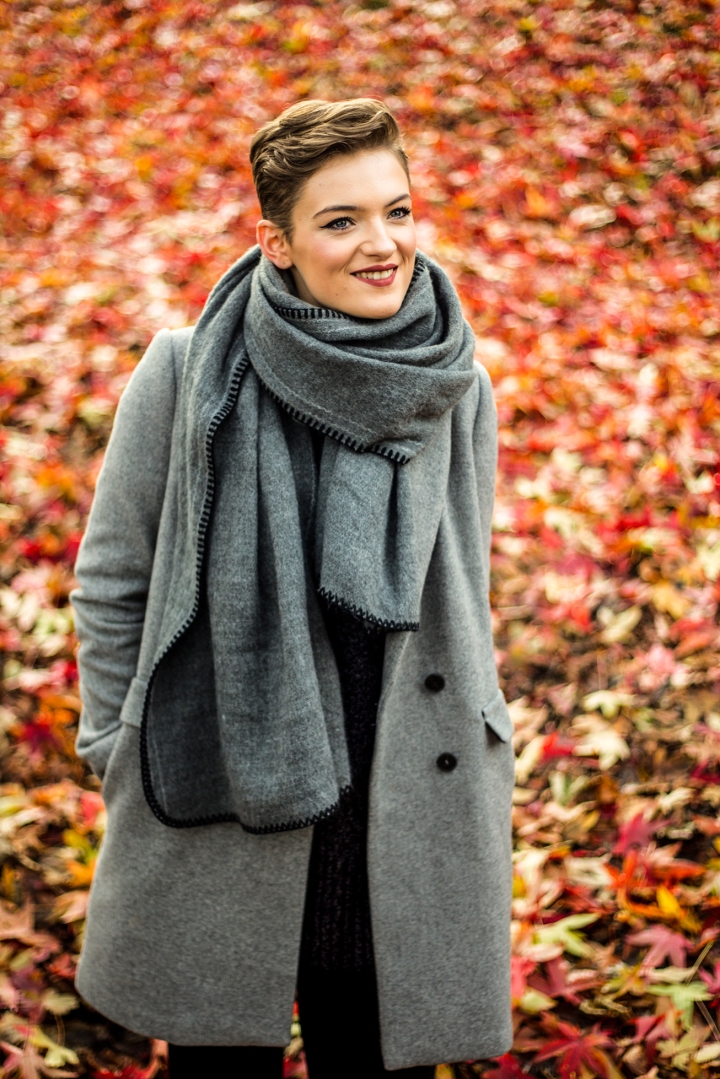 Taking up a new hobby

Be it tap dancing or tiddlywinks there is never a better time than any than at the beginning of a new year to pick a new hobby. After all the socialising of the party season I will be the first one wanting to turn into a bit of a recluse and spend the best part of the month hiding under a pile of pillows. However taking up a new hobby will not only get you your creative juices flowing and your brain back into gear but it could also give you the opportunity to socialise more and meet more like minded people. And who knows what might happen, you find that you rather quickly become the best miniature model cake crochet-er in the country! (Genuine failed hobby of mine #807)

Get out and get active!

Now hear comes the old cliche of starting off a new year by getting fit and healthy. By this I really don’t mean you have to go out and sign your life away to a new gym that you will use once, get intimidated by the large muscly men and continue to spend your evenings at home binge watching Lost with a large bowl of trifle (got to put the weetabix down on some occasions). Getting the so good old fresh air pumping through your lungs from a simple walk around the park or leisurely bike ride can do you the world of good after being cooped up inside all day. After all, it will give you an excuse to try out that new pedometer that you were so lovingly given by your mum for christmas, not as a hint or anything! 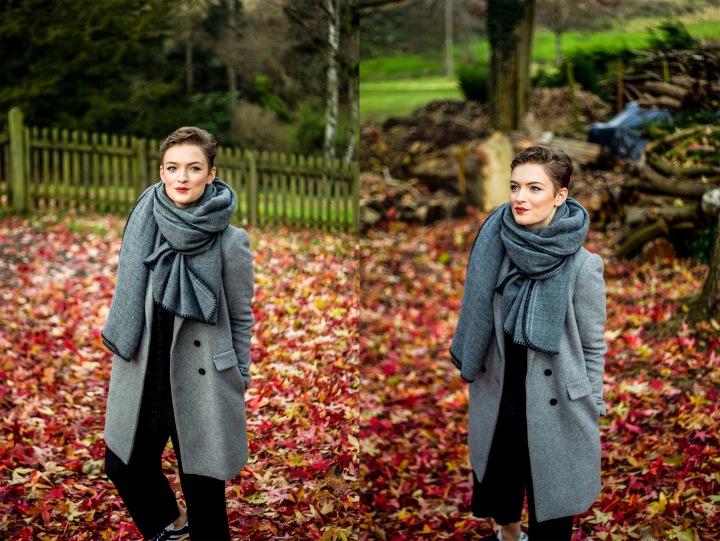 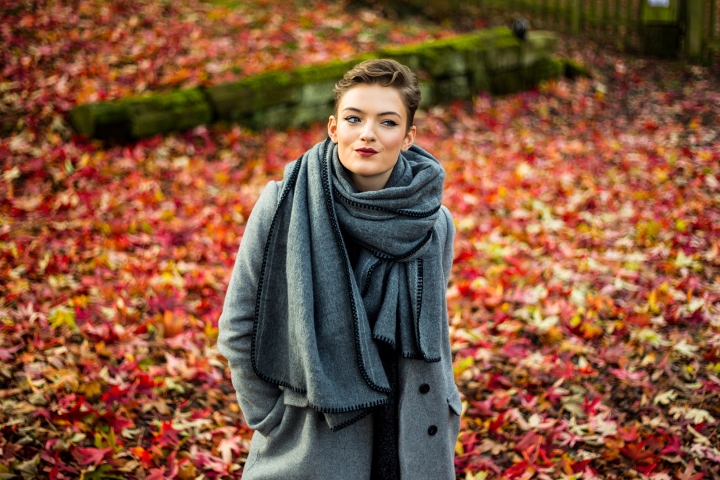 Go to the cinema

With Brent and Bridget making their returns to our screens last year, cinema has definitely been on good form recently. But with awards seasons now well underway the beginning of a new year is always brimming with brand new brilliant films to take a good gander at. Whether it be action or animation that tickles your fancy, I find its a great way to pass the time in the cold winter night.

Having a “spring” clean and getting rid of all the crap

Lambs may not have started leaping, daffodils may not have started growing and spring may not have sprung quite yet however spring doesn’t have to be here quite yet to have a good old clear out. I always find having a good old cleanse of your surroundings at the beginning of a new year will make for a much happier and healthier you. All the stuff which we have manage to accumulate over the year that we have desperately convinced ourselves that we need can either be chucked out or given a brand new how for someone to love more than you. And besides, you need to make some room for all those brand new christmas presents anyway.

I know its a pain but with most of the tins of biscuits laying bare and selection of various cheeses all finished off, its time to put down the tin of quality street and find actual proper meals made with actual proper healthy things and stuff. I’m not saying go on some crazy celery juicing health kick (if celery juice is even a thing) however after having one to many batch cooked, reheated bolognese’s at the end of last year I definitely think it is time to broaden my culinary horizons and try something which isn’t 90% pasta!

Now I just have to go and put all these into practise! 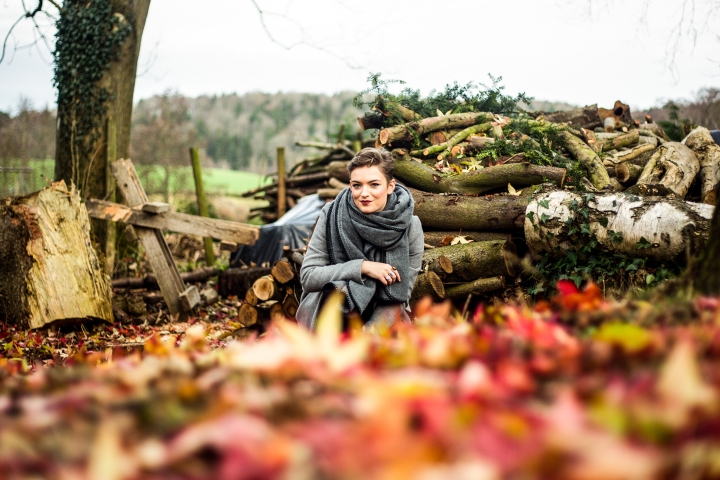 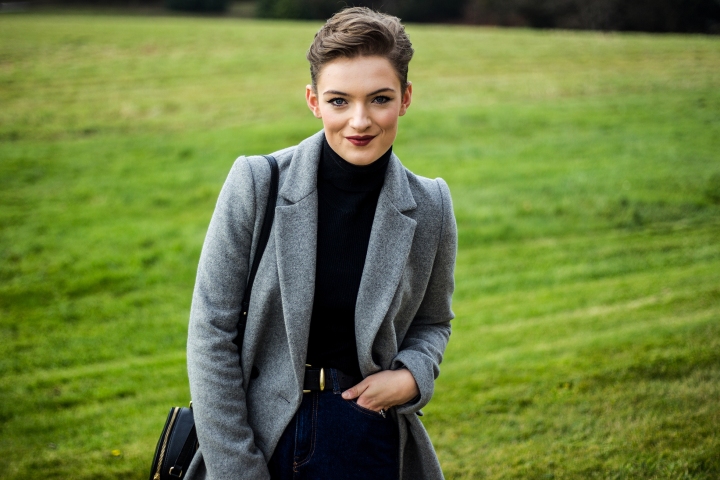 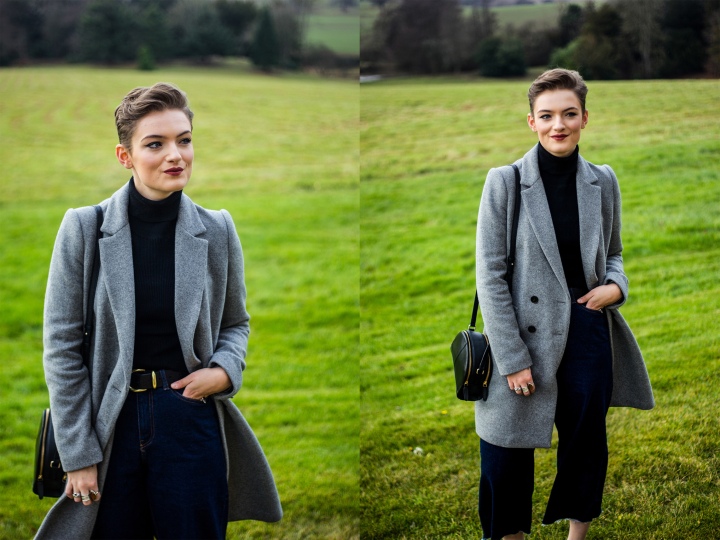 Every year winter rumbles on around (funny that) and it was finally time to tear myself away from my beloved leather jacket and into something a little bit more practical for the season. Despite last years orange number still being very much in my good books, Zara has pulled it out the bag again this year with this beautiful double breasted grey number which I have had glued to my shoulders.

Not to diminish my love for a good jumper but probably my favourite things about winter dressing is being able to crack out a good old coat and wrap up all warm and cosy. This look really encapsulates all of my favourite styles at the moment of with the ever so practical for the ankles culottes, a good knitted jumper and obviously a good old cosy coat. With the simple accessories of a chunky black belt and small and simple bag, they nicely finish this simple yet stylish look and keep everything very comfy with my Adidas Gazelles . 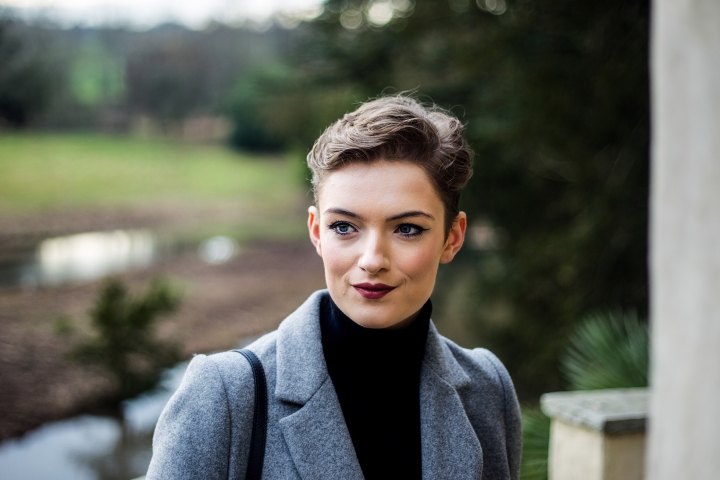 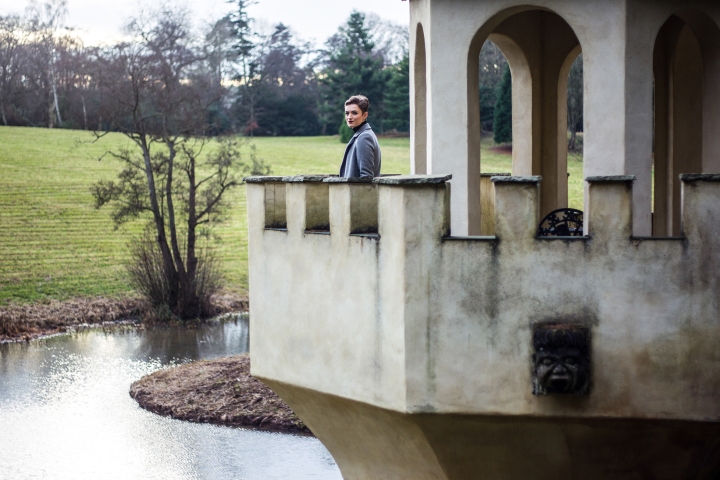 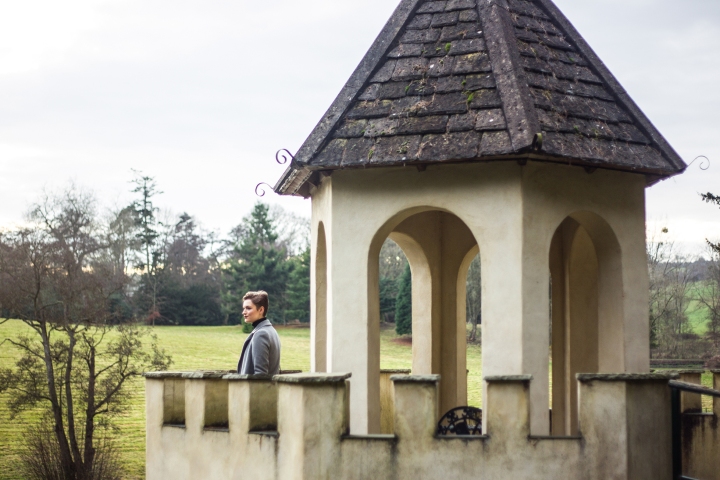 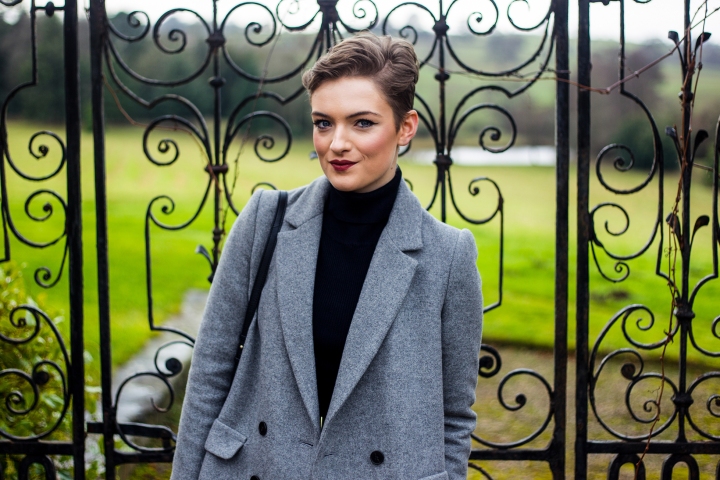 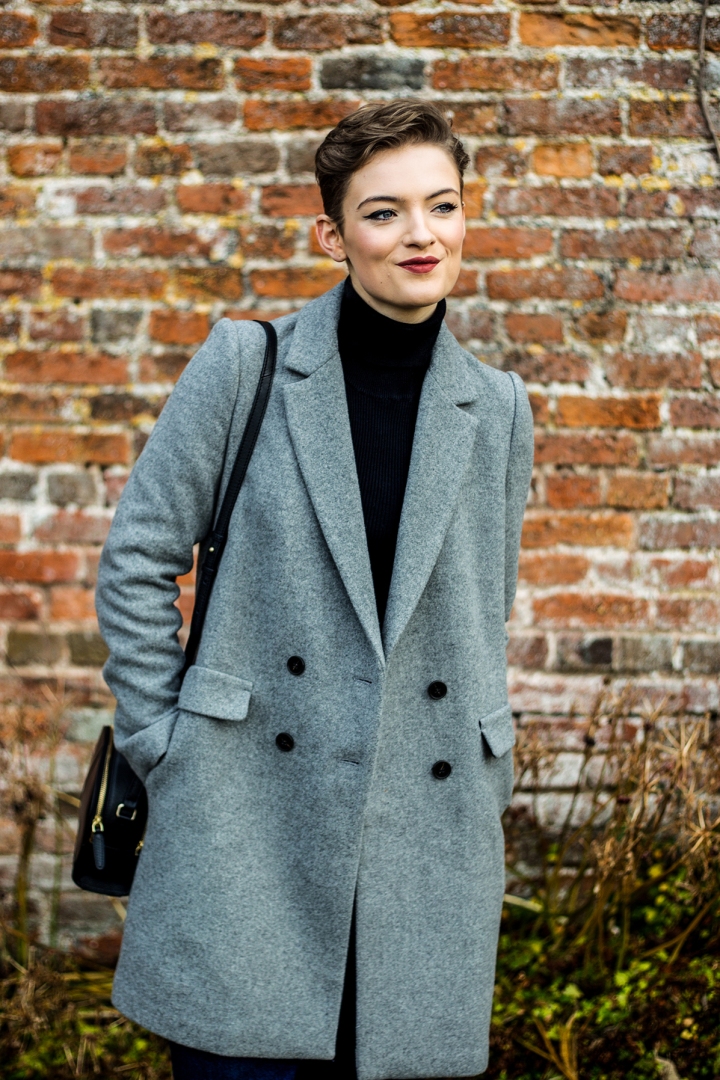 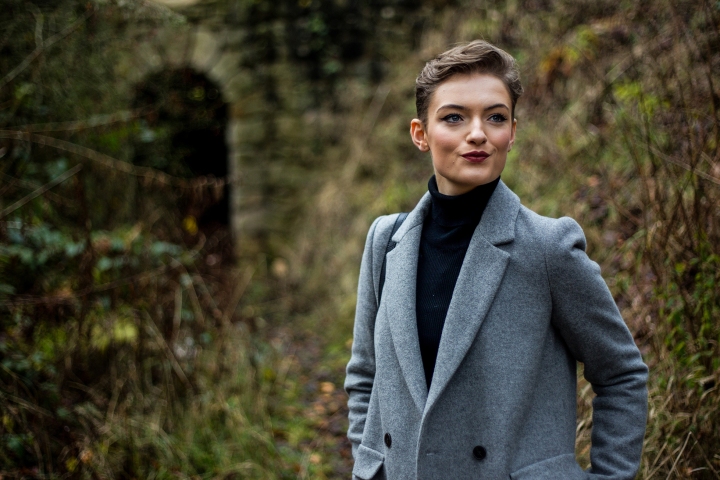 When I first heard the phrase ‘Merchant City’ I imagined some large bustling market full of stall holders seeing everything from flowers to bread rolls, as something rather expected out of a disney film.  Basically everything being all ‘Merchanty’ (totally a word).

Now I’m not going to say that this is extremely far from the truth, you may find the odd bread roll rolling around, even if it is only there for the birds. In reality, replacing the market stalls for high end shops, the main part of it is a lovely square in the centre of Glasgow, our version of Trafalgar Square if you will, (including large statue with traffic cone on its head).

Using the steps outside the GOMA art gallery we couldn’t resist doing a wee outfit video alongs side some lovely little photos. 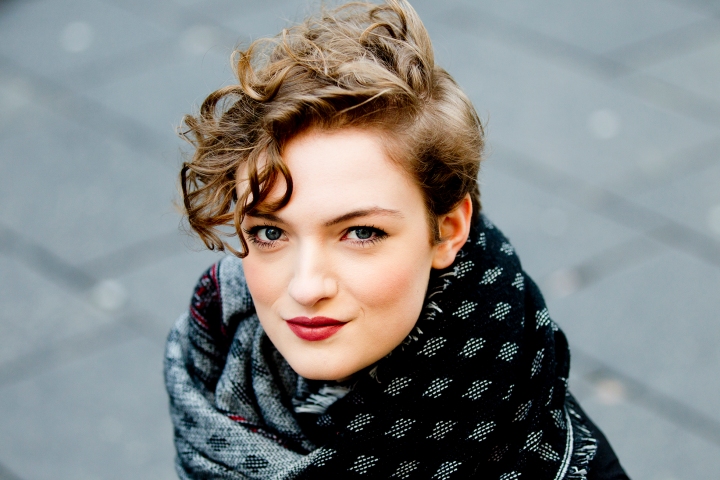 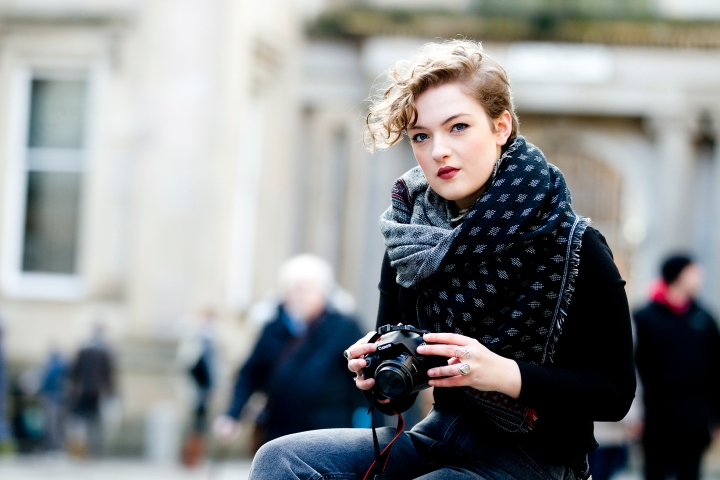 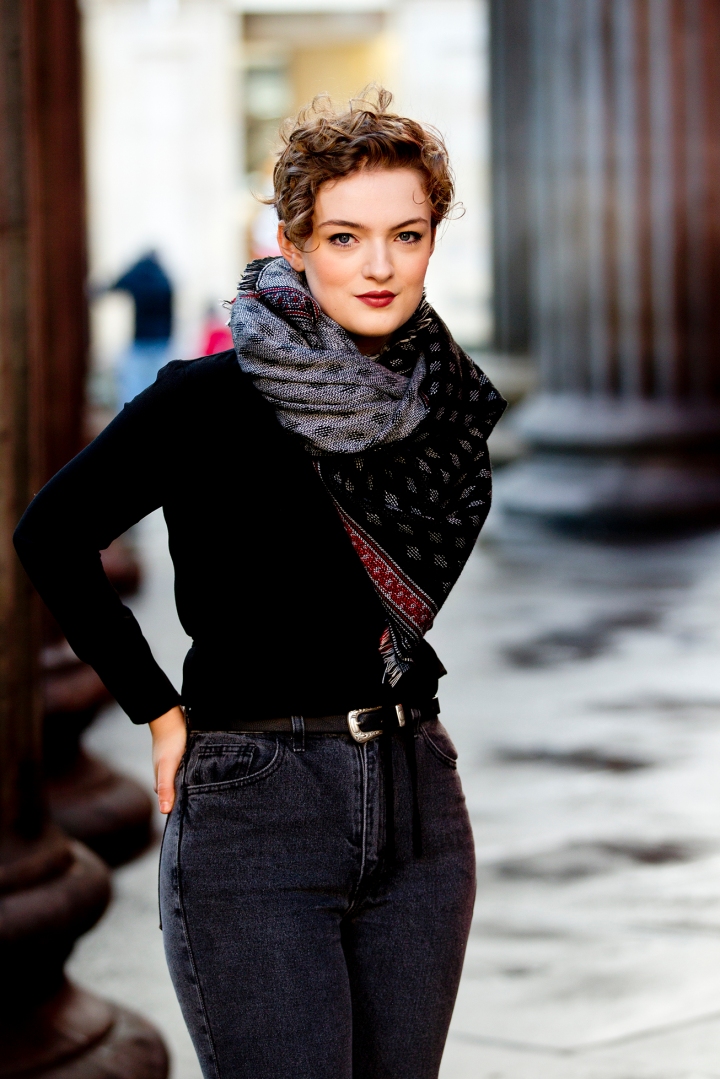 As ever for this look I didn’t move far from my beloved blacks and greys with this look. American Apparel served me very well for this outfit with the jeans and wrap top both being from there. I spoke more about these items in my Closet Confidential tag video linked here. 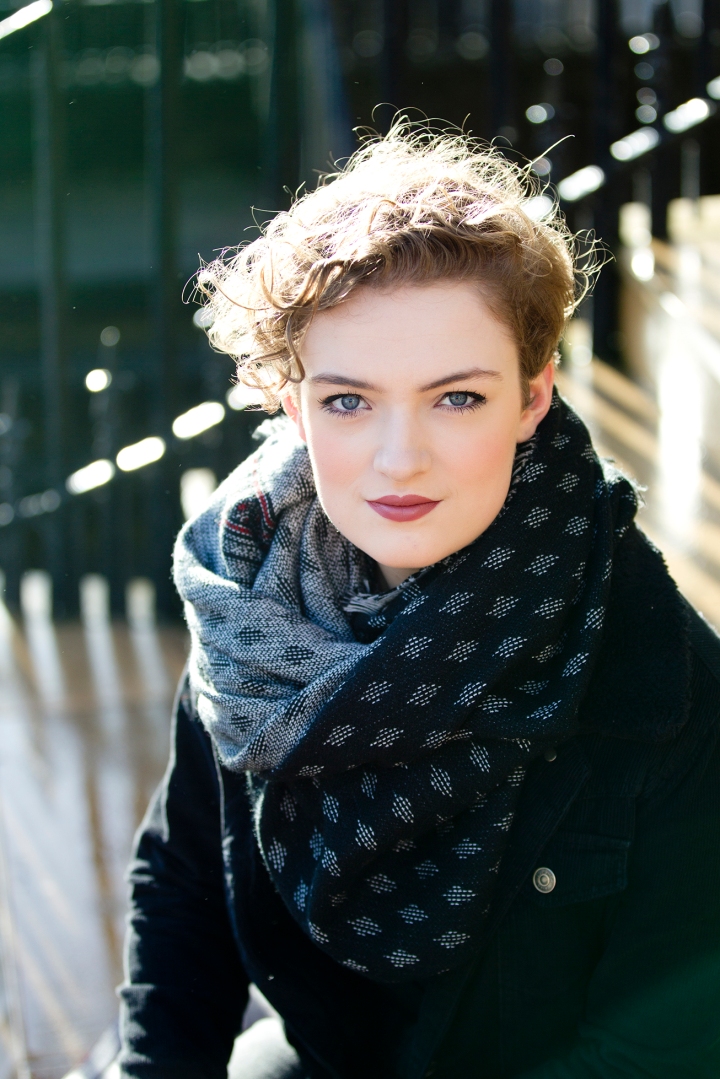 or my board on Pintrest at Fabric Forward

Brilliant photos as ever by Tom Flathers 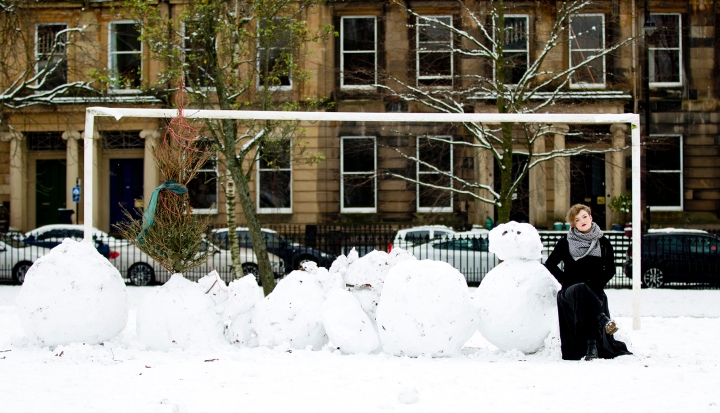 The snow may be long gone now here in Glasgow (yet it still decided to leave the cold weather behind) but I couldn’t help having a little reminisce about the beautiful fluffy stuff, and not just with a blog post, oh no no, with a video as well! I finally bit the bullet and decided to stray into the realms of what my mother like to call ”the youtube’’ and start vlogging. So if you would like to see me frolicking around in the snow, click the link below! 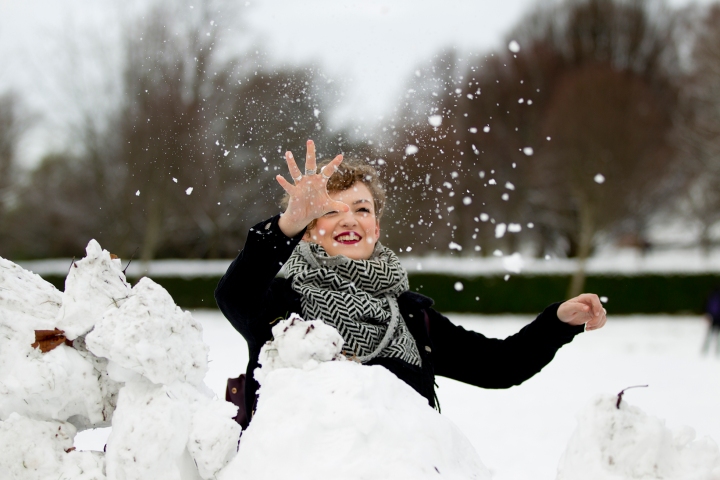 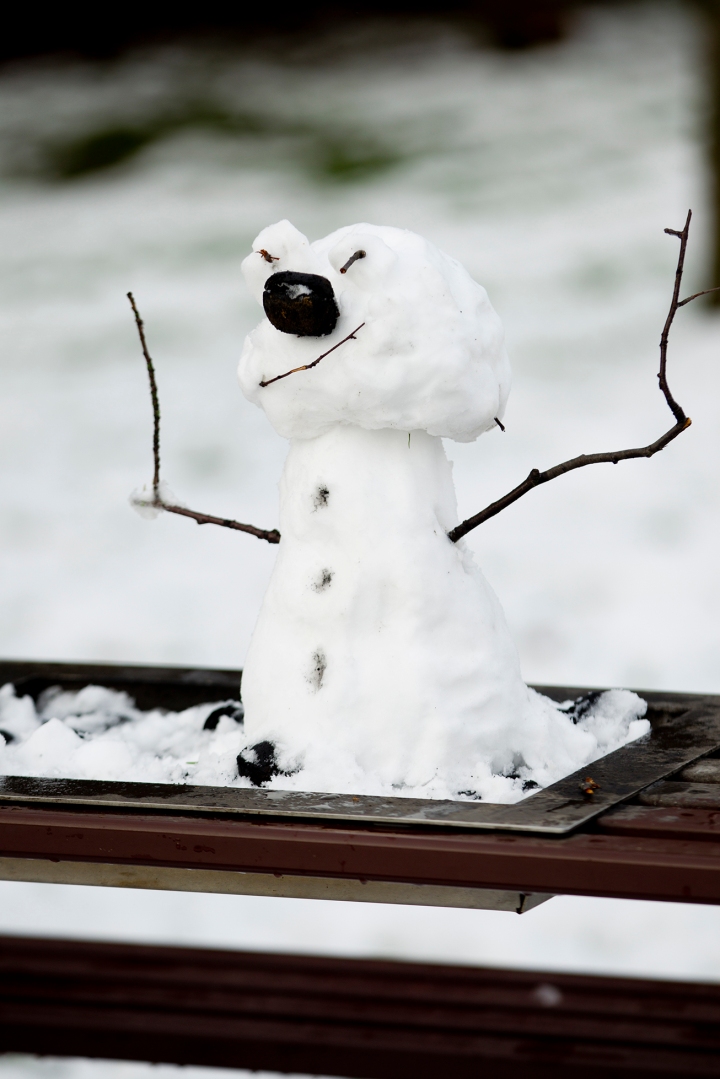 So with the snow crunching under our feet we headed off to Kelvingrove park in the lovely west end of Glasgow to get some fun little shots. It was so nice to see so many family’s and groups of friends out enjoying the snow (and for once we didn’t look odd taking loads of photos with everyone joining on the band wagon). It was nice to let out my inner 5 year old again if not for very long throwing around some snowballs and couldn’t I resist joining this funny line up of snowmen

As much I wanted to put on the biggest puffa jacket with many many layers of thermals underneath, I braved the cold to with one of my new favourite looks with really wanting to show it to you (don’t worry, not frost bite was caught in the making of this blog, my jacket was surprisingly warm). As ever it centres rather solely around black but I added a touch of pattern with, you guessed it, a scarf. (more about this in my statement scarf post here)

I have to give a moment of appreciation for my favourite part of this outfit which has to be this skirt. Nowadays I far prefer long skirts over mini skirts finding them more comfortable, not worrying about putting them down all the time, more stylish and more age appropriate (god I sound about 50!) Its made of such lovely silky fabric which doesn’t cling to you, resulting in it’s meters of fabric flowing from places I didn’t know they could flow from.  With it being a dark plain colour it is very versatile meaning you could be a lot more adventurous than me with just a plain black jumper. 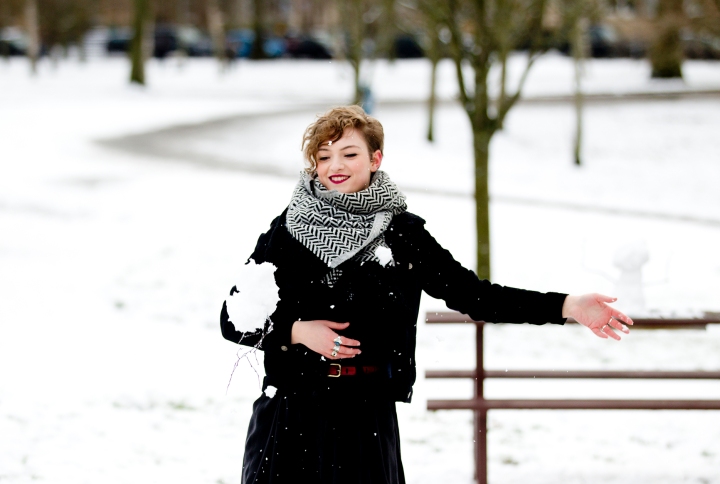 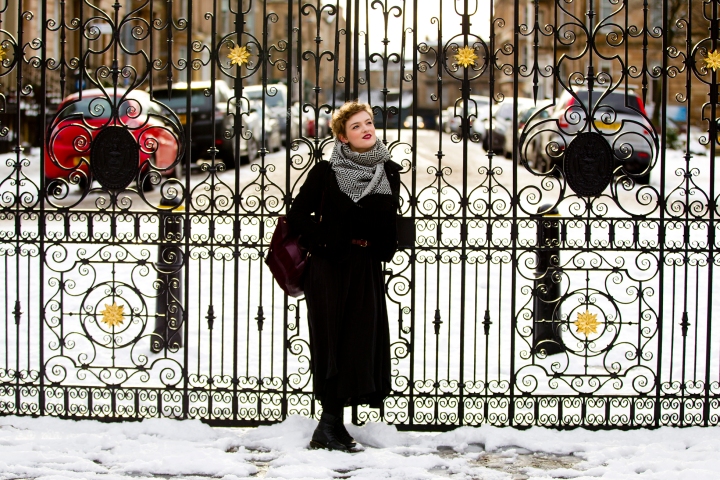 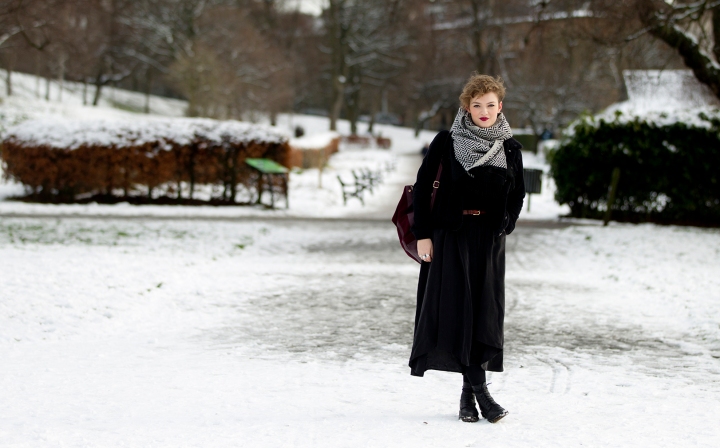 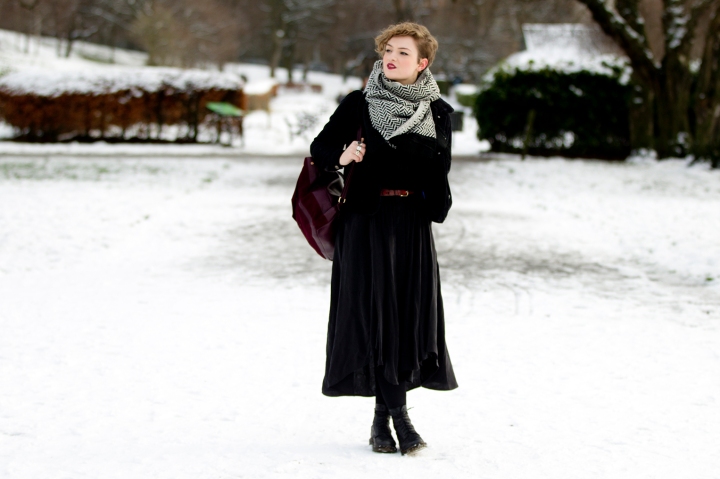 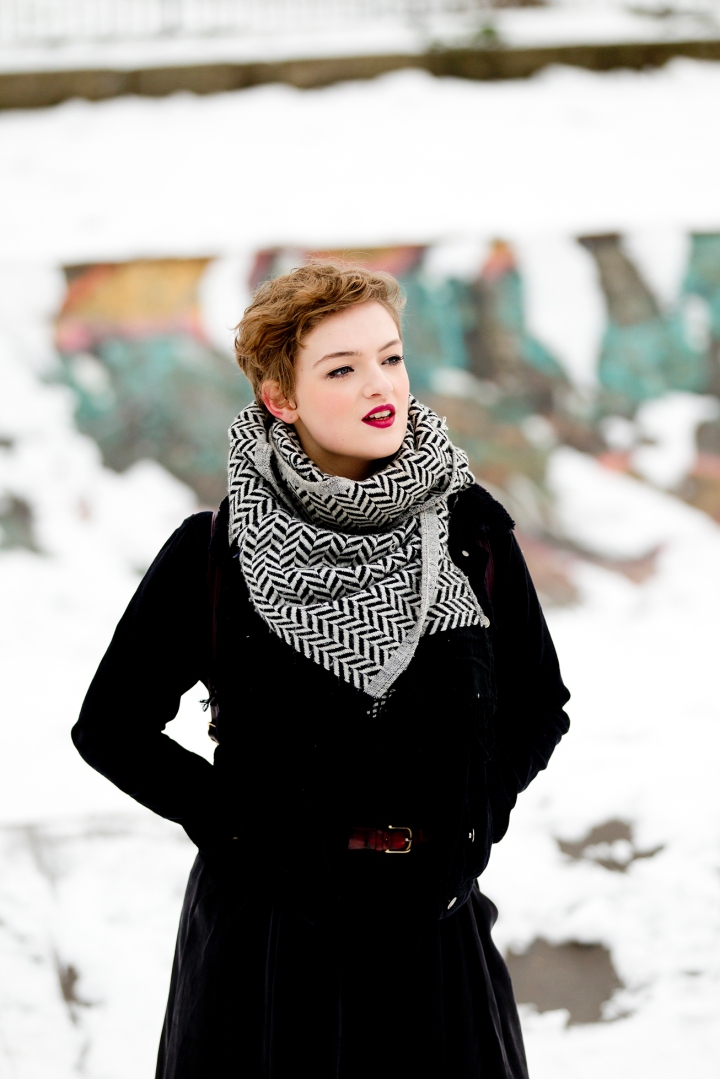 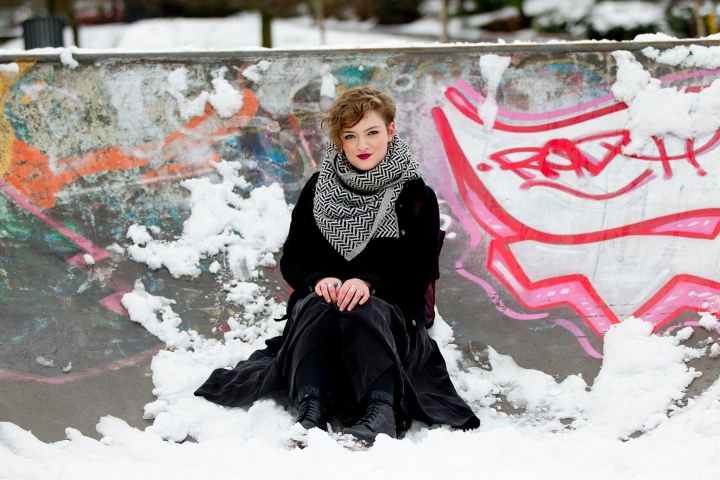 or my board on Pintrest at Fabric Forward